Many low-income families are not saving enough for retirement, and emergencies. So making a few extra dollars while binge watching Netflix or in your spare time helps you to save for the future. You can take the Shoppers Drug Mart customer service survey on your own time and on your own terms for your chance to win a $1000 Shoppers Drug Mart/Pharmaprix gift card or One million (1,000,000) PC Optimum Points. So what are you waiting for? If you have recently made a purchase at Shoppers Drug Mart, then share your thoughts with the company and get rewarded.

How to Participate in Shoppers Drug Mart Survey 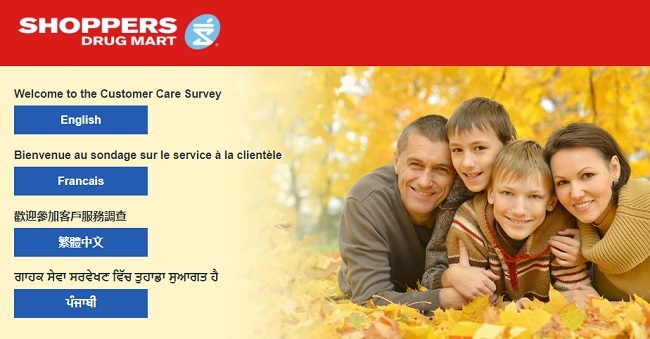 2. After that, enter the 15-digit Certificate Number found on your Shoppers Drug Mart sales receipt to begin the survey 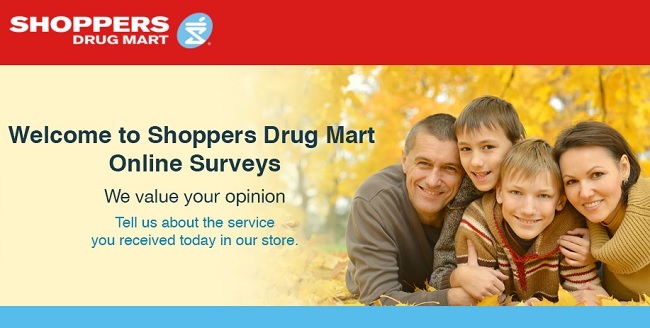 3. Now, answer the survey questions on the basis of your recent shopping experience at the Shoppers Drug Mart store

4. Upon completion of the survey, you will be asked to provide your personal details like name, email address, telephone, and postal code to receive one entry into the Shoppers Drug Mart Contest 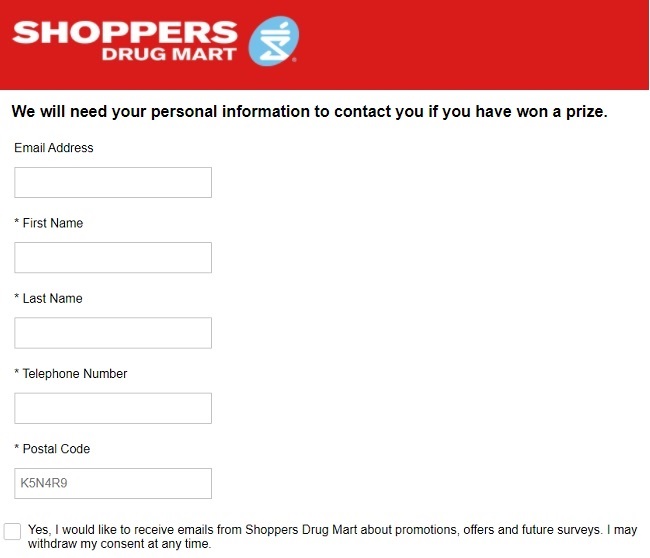 You can also complete the Shoppers Drug Mart Survey by calling 1-800-701-9163 or the number listed on the survey invitation.

Every month, two winners will be selected via random drawing on the monthly draw dates: February 9, March 9, April 8, May 11, June 8, July 8, August 10, September 9, October 8, November 9, December 9, and January 11, 2022, at 10:00 AM (ET). The winners will be notified by phone call within 4 business days following the Monthly Draw Date. The winners have to correctly answer a time-limited mathematical skill-testing question without assistance or mechanical or electronic aid.

A total of 24 prizes will receive the prize. The Winners can choose between one of the following two prize options: A $1000.00 Shoppers Drug Mart/Pharmaprix gift card or One million (1,000,000) PC Optimum Points. The ARV of each prize is $1000.

How can I get free optimum points?

No, PC Optimum points do not have an expiry

Can I redeem PC points at Shoppers Drug Mart?

You are allowed to redeem PC points once you have 10,000 points. The PC points can be redeemed and used at any participating store or online at shoppersdrugmart.ca, pharmaprix.ca, JoeFresh.ca, and PC Express websites

As per the Shoppers Optimum program, you earn 10 points for every $1 spent. So 10 points is equals to $1.

Can I use Shoppers Drug Mart gift card online?

No. Shoppers Drug Mart does not accept gift cards as a method of payment online

Can you exchange gift cards at Shoppers?

Where can I use a Shoppers Drug Mart gift card? Shivani Bhalla was really helpful she advised us in a right direction.
Thank you

Today I went to Shoppers the one on Loughed Highway, Samantha Zimmer helped me I was looking for Concealer When I got home I tried it on and it was literally perfect and Samantha was awesome, she

I had an unfortunate experience today at Wellwise, Calgary, south 25A 403-255-2288 at 2.15 p.m. on the 11th July. I come to Calgary every year to visit family and rent a walker from this store. Normally wonderful staff and assistance. Today the girl was condescending from the first sentence spoken. My daughter was at one point telling me we were going somewhere else.... every questioned asked by her and answered by me was seemingly “wrong” and asked again in such a tone that had I not needed the walker, would have sent me to another store.....i.e. she asked for my address, I gave my daughters as I was here in Calgary, when she realized this she gave a huge sigh and said in a loud exasperated manner, YOUR ADDRESS ....wow, this young lady needs to be taught how to deal with customers. I may be 75 but I have all my faculties, God help any old person who isn’t in top form having to deal with her. So sorry to be doing this at this Covid 19 time but that is how bad my experience was....

As a frequent customer at Shoppers in Dundas, Ont. I was extremely stressed while waiting much too long at checkout. During COVID-19, Shopper’s should appreciate the anxiety of their customers by moving them through their store as quickly as possible. But no, I’m lined up 24 people deep at one open cash register while a clerk was waving people to the self serve check out that nobody wanted to use. From now on, I will be making my purchases at the pharmacy counter or do my shopping elsewhere.
Disappointed Customer

I have sent a previous statement about my experience at Shopper's well wise store in Sarnia ,Exmouth street .with no reply I bought a Blood Pressure machine on Thursday,Apr.09 . I never used it as I found the product very inferior to my OMRON model On Saturday morning I went to return it (Friday was a holiday) I was the only person at the check out register and I was informed that it could not be returned until after the virus was over. This machine cost $90 I informed them that not one person had informed about this policy when I bought it or I would never have purchased it . The store had one other shopper at the back of the store with myself being the only other customer
The only reason that I came out was to return this product as I am a senior and only go out for essential things. I was a very unhappy customer about my treatment . I will try again and by then will probably be told I didn't return it promptly Once I get this resolved I will do my shopping elsewhere
[email protected] Mary Kathryn Winder

I was ar wellwise this morning to return a blood pressure machine that I purchased on
Thursday afternoon-April,09/2020 I paid $90.39 of it and it was never used as I found it to be and inferior product to my old OMRON No one said a word to me when I purchased this on Thursday that I could not return it I was the only person at the counter as they wew not busy Probably when I go to return it after the corona virus has subsided they will tell me that I( waited took long To say the least I was not at all happy with this outcome I will return and probably buy my goods elsewhere I am a senior nd only suppose tho go out for essential sevices

I went into a Shoppers Drugmart the other day too buy some Cosmetics at 1995 weston rd and i heard the counter manager talk so rude to the beauty advisor, complaining about something, I was uncomfortable and she had no right to raise her voice. They had another Counter manager named Maria and she was awesome, she had respect for everyone.

which would be difficult Hats off to Paige great sales & service

I went into to Shoppers DrugMart forest Glenn Plaza on Strasburg ,To use the post office ,I was greeted so friend by Heather Zinger at the front Door ,Her smile welcomed me into the store .As I came closer I noticed her beauitful skin and her lipsstick she was wearing ,We took a few moments and she show me a few items that would be great in my everyday use!She helped me find the lipstick/Stain I been looking for my whole life ,It is perfect !!!Thank you so so much Heather !!Also her knowledge was outstanding ,and she went to ring me in and notice my Opitium card wasnt hooked up properly and she took the time to help be get it all figured out and signed up,I was so grateful because me and computer sometimes dont agree :)My over all experience was incredible,and the Organization of the store and the cleaness was great also !!!I would shop there anyday and would recommend Anyone looking for great service and great makeup and skin care advice go there and ask for her !!Thanks again so much Heather and Keep up The amazing work !!!!!

I always get wonderful service from Hana when I shop at Shoppers Drug mart. She is very friendly and kind.

NONE OF THESE WEBSITES WORK.

I had great and friendly service by Diana today

Shopping at the Shoppers store in Barrie On is always a good experience. The staff is always
friendly and helpful,particularly a young girl named Janet , who went out of her way to assist me
with my purchase today. It is also located in an area with ample parking and easily accessible
for handicapped customers.

I only deal with Shoppers Drug Mart. They are always helpful and kind, especially Pattie in the pharmacy. Actually, all the staff at the Brantford store are helpful and kind.
Pam Minshull
certificate number: 00467702-8525620

I only deal with Shoppers Drug Mart. They are always helpful and kind, especially Pattie in the pharmacy. Actually, all the staff at the Brantford store are helpful and kind.

the service is always very quick and staff is friendly

I think the staff at Shopper's are great! They are always happy to help me find things and always have the medicines for my husband, who has Dementia, bubble wrapped and ready. I also like using the many Optimum points I get there. Shopper's is a great store!!

Got super bad service at store in Arnprior Jan 1st person working in store was yelling and and being a ass-hole just because I didn't finsh my shopping at closing time. How important is it that that the store closes right on the said time?

Her name is CARLY and she has all the requirements to be a great salesperson.She was very patient,experienced,kind and caring Not to mention she was professional and has a good product knowledge.She helped me to get the correct foundation for me together with a lipstick.

Me and my husband are very impressed with her services.I am sure she is an asset to your branch and hope to see her leading a sales team at Shoppers.

Hello, I am a regular customer of Shoppers Drug Mart here in 3029 Clayhill Road, Mississauga, On L5B 4L2. What I've noticed every time I entered is the beautiful smile of the lady assigned in the cosmetics section, then, when I go around, wow! the smell is so terrific and the area is so clean. After grabbing all our household needs and pay to the cashier, a helpful hand of Marivic is always there and explaining everything.... she's so kind which make me feel comfortable to come again and again in this place.
Merry Christmas and a Happy New Year to all of you and God Bless.

Only place I want to spend my money.

HI i was just in the Shoppers Drug Mart Store in Smiths Falls Ontario on Beckwith street, I have to say the service is to be commended, The store its self is very tastefully decorated as well as being one of the cleanest stores in town. Thank you to staff on Cash,on the floor as well as the pharmacy which is what I use for all of my prescriptions.

I shop at the Lakeshore East Shoppers and the staff are always helpful, pleasant and eager to please. The area of cosmetics and perfumes is extensive and I always deal with the same cosmetics clerk she is amazing. Amanda is always pleasant and always has a smile on her face. The pharmacy staff are so accomadating and always very helpful. y

Bought a bag of sugar, cause i is half the cost here compared to Nearest price in supermarkets, young guy was nice at the till.

Go to Florida every year; need my drug prescriptions filled before going there. Adam is the man to do that.- never fails. thanks again.

Just came back to pick up my prescriptions at shoppers drug mart in Penetanguishene. Great service, Megan is a gem, the staff at this establishment is always very helpful, their smile and laughter are contagious. Love shopping there.
Jeannine